Returning for a second consecutive year following an incredible debut event to ring in 2016, Italy’s Cosmo Festival has now confirmed some of the biggest names in the techno world for its highly anticipated sophomore edition in Rome.

Set to perform in front of up to 10,000 people at what will arguably be one of the biggest NYE & NYD events in Europe, is an exquisitely curated selection of the most sought after names in the industry, including Chris Liebing, Joseph Capriati, Loco Dice, Nina Kraviz, Pan-Pot and Ilario Alicante. More artists will be announced in the coming weeks.

The unique event, which spans both New Year’s Eve and New Year’s Day, ending at 4am on January 2, will take place across four different indoor venues, all within 100 meters walking distance from each other. Partygoers will have access to all of these venues throughout the duration of the event.

Hailing from Frankfurt, Chris Liebing is one of the undisputed dons of the German Techno circuit and a driving force behind established imprints CLR and Spinclub Recordings. With a long-standing weekly radio show also to his name, Chris will be heading to Rome at the end of the year for his highly anticipated Cosmo NYE debut.

Joining him will be fellow compatriots Tassilo Ippenberger and Thomas Benedix – aka Pan-Pot. Having shot to international prominence over the course of a decade, this duo now firmly resides in the upper echelons of electronic music, known the world over for their flawless productions and dynamic live performances.

Next up, and needing little to no introduction whatsoever, ???? label boss and one of Techno’s true frontrunners, Nina Kraviz, will be joining proceedings, as she prepares to bring her unique acid-tinged soundscapes to Rome for her first Cosmo outing.

Now recognised as one of the principal profiles in the industry, and fresh off the back of an intense summer season touring across the continent, Joseph Capriati has fast established a reputation as a universally popular and in-demand talent. Representing Italy at this landmark event, Capriati will be joined by Tunisian-born legend and HYTE regular Loco Dice, whose impressive discography spans iconic imprints such as M_nus, Cadenza, Ovum, Four Twenty and Cocoon. Having made his Timewarp debut at the tender age of just fifteen, German producer Ilario Alicante completes the first phase of this mammoth lineup. 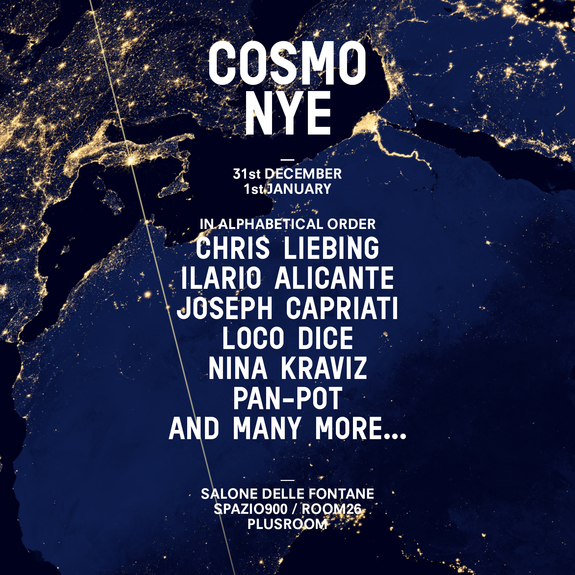 Beatport ReConnect presents 'Together for Beirut'