DOORLY HITS THE US FOR SIX DATE TOUR THIS MAY

Cajual, Dirtybird and Hot Creations star Doorly embarks on a six date tour of the US this May, with stops in California, Texas, New York and North Carolina.

Arguably best known for collaborations alongside Shadow Child on the immense ‘Piano Weapon’ and Cajmere with ‘The Way’, Doorly is one of the UK’s hottest house exports, both in the studio and behind the decks.

2016 has already been an impressive year for Doorly. In February he dropped his hugely anticipated remix of Carl Craig & Green Velvet’s ‘So What’, with that same month seeing the release of ‘Want Silver’, a collaboration with ZDS on David Squillace’s This & That imprint. Following that were remixes of Claptone ‘Anything’ and House of Virus & Jimi Polo ‘Better Days’ with further releases alongside Switch, Idris Elba, Marshall Jefferson, DJ Pierre & Todd Terry and Gene Farris in the pipeline.

Accompanying Doorly on the six date tour will be some of his closest and most talented DJ friends, including appearances from Moodymann, Andres and more special guests to be announced soon.

“Leaving my home in L.A for the summer season in Ibiza is always gut wrenching for me as it’s a long old five or six months away from my best mates in the states!” says Doorly. “So I thought I’d put together this little Doorly & Friends mini run around some of my favourite clubs in America taking me right up to the threshold of my Ibiza Season for the Space Opening and bringing some of my closest and most talented friends along with me for the ride.”

Don’t miss this opportunity to catch one of the world’s premiere house DJs in action. 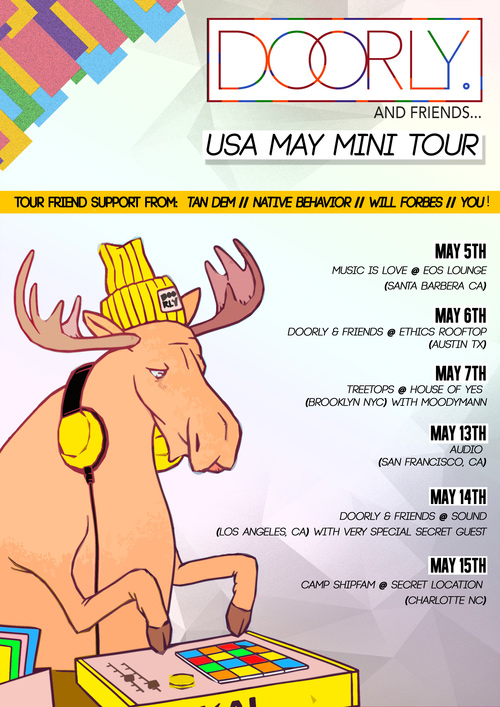